Naunita Harmon Carroll stood in silence, her eyes shielded from the late-afternoon sky by her wide-brimmed hat, as the United States Navy’s newest destroyer escort slid down the ways from the Bethlehem Steel Company’s shipyard and into the Fore River.

It was late afternoon on July 25, 1943, a little over eight months since her son and dozens of others had been killed aboard the U.S.S. San Francisco in fierce night fighting off Guadalcanal, and the lifelong Texan had traveled to Quincy, Massachusetts, to see her second born honored in unprecedented fashion.

The U.S.S. Harmon was the first United States warship to be named after an African-American, earning its namesake a now mostly forgotten place in history.

“I hope that this ship will do the work that my boy started and carry on as he would have done,” Harmon’s mother told a reporter from the Afro-American newspapers.

As she spoke, the Navy Cross awarded to Mess Attendant 1st Class Leonard Roy Harmon gleamed on the front of her black-and-white dress. After maintaining her composure throughout the brief ceremony, Naunita broke down in tears.

Leonard Roy Harmon – known in the family as Roy – was born January 21, 1917 near Cuero, a town of a few thousand located about 90 miles east of San Antonio. His father, Cornelius, was a farmer, like many of the family’s neighbors. Roy had an older brother, also named Cornelius, and would welcome sisters Pauline and Constance to the family in the next few years. Naunita would begin working as a schoolteacher around 1920, after all the children were born, but tragedy was soon to follow.

On January 13, 1922, Cornelius Harmon was gunned down at his home by an armed posse. According to an account in the Houston Post, Sheriff John A. Pace went to Harmon’s home to arrest him in connection with the shooting death of railroad porter Leroy Bressette earlier that day at the San Antonio and Aransas Pass depot. Harmon reportedly was armed with a shotgun and a revolver but appeared ready to “submit to arrest peaceably” before suddenly firing twice at Pace, with one of the shots taking off the sheriff’s hat. Pace returned fire, hitting Harmon twice in the arm, before heading to his car and returning to town for reinforcements. When Pace and the others arrived back at Harmon’s house, the suspect was sitting on his front porch with both guns loaded and ready. Officers said Harmon began firing as soon as they came into range before “members of the posse began firing, several shots taking effect.”

There was no mention of Harmon’s family in the original story or another about a week later that said a judge had ordered an investigation into the circumstances surrounding his death. But Naunita suddenly was left to move forward alone while caring for the four young children. As the Harmon children grew, they gained a new father figure when Naunita married a fellow educator, William D. Carroll, a teacher and coach at Cuero’s segregated Daule High School who later moved into administration.

By the mid-1930s, Roy was a student at Daule High, where he played baseball and basketball and sang in the glee club. He worked in farming for a time after graduation before deciding to join the Navy. Per his family’s account, he was rejected two or three times because of a heart murmur before eventually being accepted and officially enlisting on June 10, 1939 as a mess attendant third class. After training in Newport News, Virginia, he joined the crew of the U.S.S. San Francisco on October 28. The heavy cruiser would serve as his primary home for the remaining three years of his life.

Roy Harmon was present during the opening moments of the United States’ entry into World War II, as the San Francisco was moored at Pearl Harbor on the morning of December 7, 1941. Japanese planes did not target the ship that day, but the dock it shared with the U.S.S. New Orleans took some fire during the day. The San Francisco was in the midst of an overhaul at the time and had no heavy weapons available for defense, leading some men to rush to the New Orleans to try and assist with antiaircraft defenses. By early January, the San Francisco was headed to the South Pacific and the area around the Solomon Islands, where she would remain for much of the rest of 1942.

Smoke rises from the USS San Francisco off Guadalcanal on Nov. 12, 1942 (via NHHC)

On the afternoon of November 12, 1942, the San Francisco was part of a task force covering amphibious landing operations off Lunga Point on the northern coast of Guadalcanal. Some 52 Japanese planes attacked the group, and one of them was hit by antiaircraft fire from the nearby U.S.S. McCawley. The wounded torpedo plane crashed into the after superstructure on the San Francisco before falling into the water on the port side. One officer and 15 men were killed and four officers and 25 men were injured, many of them badly burned. Most notable among the second group was the ship’s executive officer, Cmdr. Mark H. Crouter, who refused evacuation to a transport ship with the rest of the wounded that evening, choosing to remain with his vessel.

In the early morning hours of November 13, the San Francisco and the rest of the task force engaged Japanese naval forces between Lunga Point and Savo Island, to the northwest. The San Francisco first opened fire on the enemy at 1:48 a.m. but by 2 a.m. had come under a barrage from three sides. Within the next hour, the ship took approximately 45 hits, an estimated 15 of them from major-caliber rounds. One salvo hit the navigation bridge, killing the task force commander, Rear Adm. Daniel J. Callaghan, and members of his staff, along with the San Francisco’s commanding officer, Capt. Cassin Young. Another shell passed directly through the executive officer’s stateroom, killing Crouter.

Harmon’s exact actions throughout the attack are unknown, but his Navy Cross citation describes the 25-year-old mess attendant “displaying unusual loyalty on behalf of the injured Executive Officer.” As the U.S. Naval Institute notes, that care likely came after Crouter was injured the previous afternoon and before the early-morning naval attack, for Harmon was also cited for “invaluable assistance in caring for the wounded and evacuating them to a dressing station.”

His final act was his most courageous. Harmon was on deck working as a stretcher bearer alongside Pharmacist’s Mate Third Class Lynford L. Bondsteel when a 6-inch shell from the battleship Hiei hit the San Francisco amidships. Harmon reportedly shouted “Look out, Doc!” and pushed Bondsteel to the deck. As he covered his shipmate, Harmon bore the brunt of the shrapnel, and the wounds ultimately proved fatal.

Harmon was among 189 who were killed, seriously wounded or missing in the wake of the attack, and like the rest of the dead, he was buried at sea. 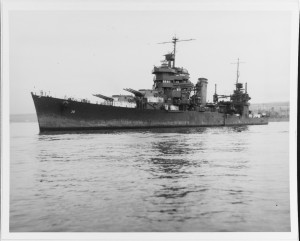 On December 4, the pockmarked San Francisco limped back into Pearl Harbor. Four days later, Secretary of the Navy Frank Knox wrote a letter to Naunita Carroll, expressing his “personal condolence” on the loss of her son.

Word of Harmon’s heroism made it through the ranks, and in late March 1943, his mother received another letter from the Navy Department, this one informing her that her son had been awarded the Navy Cross. Finally, on May 21, Knox approved the naming of the new destroyer escort in honor of Harmon, a historic gesture by the U.S. Navy.

“The USS Harmon will be the first American warship named for a Negro,” The Baltimore Sun wrote in an editorial two days later. “It will not be the last.”

As the date of the christening approached, the San Antonio Register appealed to the local community to help the Harmon family with expenses for its trip to Massachusetts. As of early July, “more than $229” had been raised to help get Harmon’s mother there, but she was in ill health and wanted to make sure at least one of her daughters could accompany her. Within two weeks, $124.81 had been contributed, allowing Harmon’s sister Pauline to make the journey.

On July 21, Naunita and her husband set out along with Pauline and her sister Constance, setting out by train from San Antonio via New Orleans, St. Louis, Pittsburgh and New York before arriving in Boston three days later.

At 6:30 p.m. on July 25, Naunita smashed a bottle of champagne against the keel of her son’s namesake ship, pronouncing, “I christen thee U.S.S. Harmon.” With that, the $3.5 million vessel designed for convoy escort duties slid into the water. It would officially enter service on August 31 under the command of Lt. Cmdr. Kendall E. Read and eventually earn three battle stars while serving mostly in the Pacific through the end of the war. 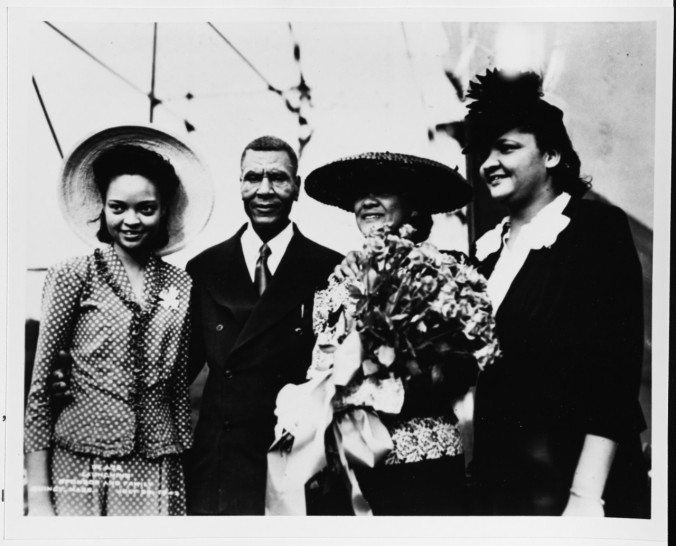 Gathered for the USS Harmon christening on July 25, 1943 are W.D. and Naunita Carroll, middle, and Harmon’s sisters Pauline and Constance (via NHHC)