From an early age, Vernon Lyle Bensley could be counted on to excel.

Perhaps it was his status as the second-youngest of Joseph and Anna Bensley’s eight children that helped him find whatever drive it took to stand out among the crowd. Whatever the case, evidence is dotted along the path of his all-too-short life that he was someone who could be counted upon to get things done.

The first evidence we see of young Vernon’s drive begins at age 10. He is living in tiny Iroquois, South Dakota, with his parents and his siblings who have not yet moved on to homes of their own.

One of the area papers, the Evening Huronite, sponsors a regular contest in which children who color in the paper’s comic strips can win a ticket to the Huron Theatre. Vernon is one of the winners announced in the August 9, 1934, edition, and that’s only the beginning. For the next few years, his name appears regularly among those whose “neat” and “attractive” coloring efforts earn them a free movie.

By 1938, at age 14, Vernon is inducted into the Busy Cub 4-H Club of Iroquois, and that same year he is elected freshman class secretary and treasurer at Iroquois High School. He remains involved in a variety of activities throughout high school and as a senior in November 1941 he takes first place in the school oratory competition, giving him the opportunity to advance to the district-level competition.

A kid like that in November 1941 would have been well aware of what was going on in the rest of the world. But sitting in a classroom in Iroquois every day — a little over 100 miles from Sioux Falls, a little under 300 miles from Minneapolis — it’s hard to believe the youngest of the four Bensley boys could have imagined what awaited him once the dominoes started falling the following month.

As the calendar turned to 1942 with the United States now fully committed to the war, Vernon Bensley at least could focus on his studies for the short term. He ended the school year as the salutatorian in a nine-person graduating class, standing that gave him the opportunity to address the crowd at the Iroquois Methodist Church during commencement ceremonies on May 27.

That fall, he attended Huron College, about 20 miles from home. Not content just with academics, he served as a stage manager for the Campus Players’ production of “The Florist Shop” in December, working alongside fellow freshman and high school classmate Dale Sergeant in making sure the show ran like clockwork.

He wouldn’t even get a chance to finish out his freshman year, though. On March 17, 1943, Bensley was called into military service. Within a week and a half, he had reported for duty at Fort Snelling, Minnesota, just outside the Twin Cities.

So began a 14-month stint in which he learned how to become  a soldier. In that span, Bensley would train at Camp Blanding, Florida; Camp Robinson, Arkansas; Camp Rucker, Alabama; and Fort Meade, Maryland. On July 1, 1944, he shipped out for Europe, never to return.

Bensley arrived in Italy after crossing the ocean and spent about six weeks there before making the jump to where the real action was.

The baby-faced noncom was now a member of the 30th Infantry Regiment, 3rd Infantry Division. By the end of the war, the 3rd would be the only American division that could claim to have fought the Germans on all fronts. It had initially landed in North Africa, then hopped to Sicily and distinguished itself at Anzio. Its next assignment was Operation Anvil (later Dragoon), the invasion of Southern France.

The 3rd Division would hit the shore southwest of Cannes, near St. Tropez, at 8 a.m. on August 15, 1944. Within days, the 3rd Division was near Marseille, which would soon be taken by French troops. Allied forces rolled north from there, reaching Lyon by the end of the month and linking up with Gen. George S. Patton’s Third Army near Dijon by mid-September.

With the Normandy beachhead unthreatened, Paris back in Allied hands, and a second foothold established in the south of France, plenty of Americans held out hope the war would be over by Christmas. But of course the worst of it was yet to come.

The 3rd Division spent the fall and early winter dealing with the horrors of the Vosges Mountains, eventually slogging its way to within sight of the Rhine at Strasbourg. In mid-December, the 3rd Division was assigned to deal with the “Colmar Pocket,” relieving the 36th Division. The French First Army attacked the pocket of German resistance in the week before Christmas but couldn’t clear it out.

The next Allied offensive would wait until late January and eventually prove successful, but Vernon Bensley didn’t make it that far.

On January 9, 1945, Bensley led a patrol into German-held territory in the area of Bennwihr, some five miles north of Colmar. The patrol was forced to withdraw when it encountered “intense” automatic weapon fire, but when it reorganized, Bensley was nowhere to be found.

The still-young man from Iroquois, South Dakota, had been killed in action on the eve of his 21st birthday. 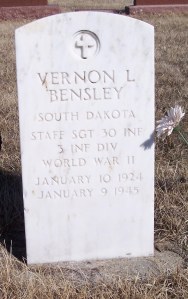 On June 15, 1949, Vernon L. Bensley was laid to rest in his hometown. The Argus-Leader noted that the services included full military ceremonies conducted by the Iroquois American Legion post.

Post 280 now shares his name. The Bensley-Rounds American Legion Post honors Bensley and fellow Iroquois native Marion M. Rounds, who was killed on Okinawa in June 1945, not long after he turned 21.