The aspect of World War II that contributes the most to the endless well of stories about the conflict that is part of this site’s reason for being is its universality. Regular people, from all walks of life, from nearly every corner of the earth, were pushed to the limits of human tolerance during every one of the 2,194 days of the war. Today we spotlight the epitome of such an everyman.

Pvt. Deane O. Birckelbaw was born and raised in the area around Normal, Illinois, and never lived anywhere else until the war pulled him away for good. He graduated from Normal Community High School and what was then called Illinois State Normal University, a music major who played the trombone.

Viewed from decades later, nothing in his background suggests an inclination toward military service. But then, there were no such prerequisites as the United States found itself embroiled in a conflict whose scope reached far beyond anything it had experienced before.

Deane’s father and namesake was born in 1891 in Illinois. By 1916, according to his wedding announcement in the local newspaper, The Pantagraph, Deane C. Birckelbaw was  “a prosperous farmer of Dry Grove township,” just outside the twin cities of Bloomington and Normal. Deane’s bride was Matilda Opperman, who at the time of her marriage had been one of the county’s “successful teachers” for six years.

Deane Opperman Birckelbaw, born July 29, 1919, was their only son. A daughter, Josephine, arrived in the spring of 1925. No doubt thanks in large part to their mother’s background as an educator, it appears both children excelled at school. The Pantagraph’s archives from the 1930s and ’40s are dotted with references to the Birckelbaws’ steadfast attendance, writing awards, and other points of parental pride.

As young Deane grew older, though, music obviously took precedence. At his high school commencement ceremony in May 1937, he had the honor of playing a trombone solo of “My Song of Songs.” Deane stayed close to home for college and played in the orchestra at Illinois State. His performances weren’t limited to school, either. He played in the band in nearby Danvers, where his parents now lived, and in April 1941 he directed a cantata at Easter services at the Danvers Presbyterian church.

War had been ongoing in Europe for a year and a half by that point, and before the end of 1941 the U.S. would have no option but to jump in. Deane Birckelbaw was there almost from the beginning. The trombone player was inducted into the army on December 10, 1941, three days after Pearl Harbor.

By April 1942 he was en route to the Pacific theater as a member of the 32nd Division’s 126th Infantry Regiment. The regiment arrived in Australia in mid-May and set up camp north of Adelaide before moving to Brisbane during the summer. By September, the pressure on Australian troops holding New Guinea had ratcheted up to the point that the Americans had to commit troops of their own in support, even though they had hardly had any intensive training.

In fact, just about everything happening with the division seemed haphazard. In the weeks after Pearl Harbor, Army planners had assigned the 32nd to the European theater. The division, which initially consisted mostly of Michigan and Wisconsin national guard troops, was in Massachusetts in late February awaiting deployment to Northern Ireland when the Army reversed course, sending the division to San Francisco. Some 3,000 replacements joined the force there, likely including Pvt. Birckelbaw, who had been training at Camp Roberts in California.

Army historians recognized the adverse effects of this juggling in retrospect, noting in the 1957 official chronicle of the campaign, “Victory in Papua,” that the 32nd was hardly battle-ready when it entered the fight: “Not only were the troops inadequately trained, equipped, and supported for the task in hand, but many of the difficulties they were to meet at Buna had been neither foreseen nor provided for”

In early November, Gen. Douglas MacArthur authorized an attack on the Japanese positions around Buna, a coastal outpost to be accessed via the jungle. Conditions were less than ideal, per the official history.

In the hot and muggy climate of the Buna-Gona area the humidity averages 85 percent, and the daily temperature, 96° F. The area was literally a pesthole. Malaria, dengue fever, scrub typhus, bacillary and amoebic dysentery were endemic there, as were the lesser ills–jungle rot, dhobie itch, athlete’s foot, and ringworm. Unless the campaign came to a quick end, disease would inevitably take heavy toll of the troops.

Also sketchy were estimates of enemy strength. No one seemed to have a firm grasp on what might await the green Americans, whether in number of Japanese troops or accurate portrayals of the terrain that awaited them. Many of the maps in use in the field were incomplete or inaccurate. 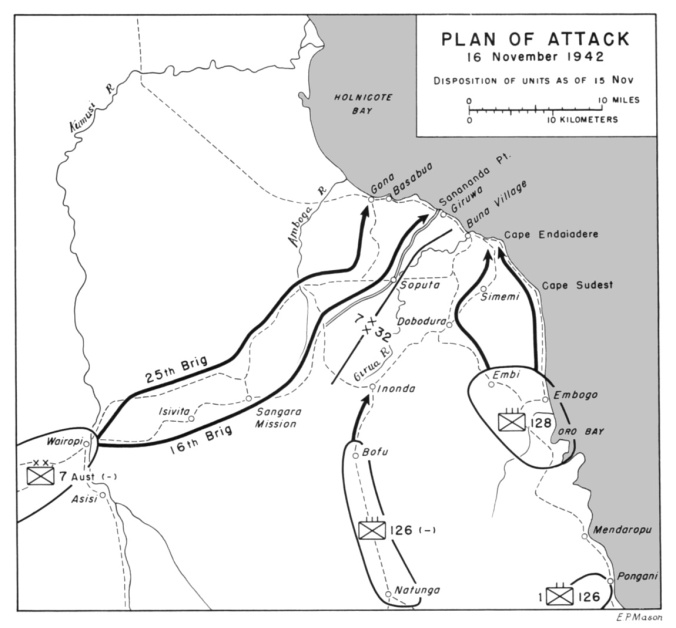 (From “Victory in Papua”)

The 32nd Division was joined in the attack by the Australian 7th Division under the command of Maj. Gen. George Vasey. The operation began November 16, with units from both armies working their way through the jungle toward the coast. On November 19, the 126th Regiment under Col. Clarence Tomlinson was put under Vasey’s command to supplement the Australian forces. The main attack was to go off on November 22, but Pvt. Birckelbaw didn’t make it that far. He was killed in action on the 21st.

Back in Illinois, the Birckelbaw family celebrated Thanksgiving the following week with no knowledge that young Deane would not return. In fact, it wasn’t until New Year’s Day that a telegram arrived from the War Department informing them that he was missing in action. The dreaded follow-up message arrived on March 9, 1943, telling the family Deane had been killed some three and a half months earlier.

Before departing for training in 1941, Birckelbaw had written a letter to his family that was to be opened only in the event of his death. It included instructions on how he wished his memorial service to be held:

“My funeral, if there be one, must not be an expensive affair. There shall be only one flower, that from my family. The rest that would be spent on flowers shall be put in a cup and placed in front of the altar and dedicated to God and be given to the relief of human suffering. This is my request. Deane Junior.”