The first priority of the American troops landing at Omaha and Utah beaches on D-Day was to establish a foothold on the continent, which they were able to do by sundown on June 6, 1944. The second was to secure a port, Cherbourg, to facilitate the unending influx of men and materiel needed to end the war in Europe once and for all. 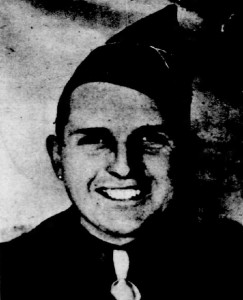 The 79th Infantry Division missed D-Day, having arrived in England only two months earlier, but it had a key role to play in the drive to secure the capstone of the Cotentin Peninsula. After landing at Omaha Beach on June 14 (D+8), the 79th drove west and turned north toward Cherbourg in company with the 4th and 9th Divisions.

Among the men in the 314th Regiment of the 79th was a former logger from northwestern Pennsylvania, Cpl. John D. Kelly. The 23-year-old’s courage was to play a critical role in sealing off a port the Allies considered crucial to their invasion strategy.

As the Americans closed in on Cherbourg, the 314th was handed an unenviable assignment: Take Fort du Roule. A stronghold built atop a cliff south of the city, the fort (pictured at the top of the page) was considered impregnable by its German defenders. “Through Combat,” the history of the regiment, provides a harrowing description:

“The French had first fortified it, but the Germans had added the murderous finishing touches. The approaches were covered by concrete emplacements and pillboxes from which interlocking bands of machine gun fire sprayed the whole area, there were heavy and light artillery, ack-ack guns swung low to play point-blank into the attackers, an anti-tank ditch 30 feet deep, and a mess of barbed wire to slow the advance. To take it seemed an almost suicidal mission … but there was no taking Cherbourg without it.” 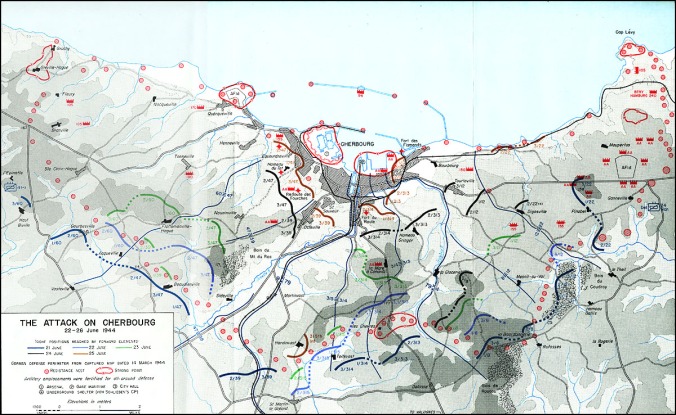 Efforts to dislodge the Germans began on June 24, but the 3rd Battalion of the 314th could make no headway, taking “prohibitive casualties” from the aforementioned defenses in attempting to make it up to the fort.

After regrouping that evening, the regiment laid the groundwork for another attempt beginning at 8 a.m. on the 25th with a bombardment of the area. 2nd Battalion finally had a breakthrough around mid-morning, overcoming a fortified position a few hundred yards east of Fort du Roule. At 10:00, Cpl. Kelly and the men of Easy Company joined Fox Company in attacking from the east and south, attempting to neutralize the pillboxes defending the fort one by one.

The official history describes the coordinated approach required for the job, with a group of men using bangalore torpedoes to blow through the barbed wire, then another following up with charges fastened to poles and inserting them into firing apertures while others laid down covering fire on the pillboxes themselves.

One bunker in particular was giving 2nd Battalion trouble, and Cpl. Kelly volunteered to make another attempt. He picked up a 10-foot pole capped by 15 pounds of TNT, “climbed the slope under a withering blast of machine gun fire and placed the charge at the strongpoint’s base.”

The resulting explosion made no impact, so Kelly set off for another attempt. This time, the charge blew the ends off the German machine guns. The job wasn’t done, though, so he retrieved a third pole charge and successfully breached the rear entrance of the strongpoint, “then polished it all off with a few grenades. That was all the persuasion the groggy defenders needed!” the official history exulted.

An officer who observed Kelly’s actions that day later described them to war correspondent Henry T. Gorrell of the United Press:

“We were pinned down by machine guns with dead and wounded all around us when I saw this guy carrying a long pole. It was Kelly with the pole charges — long sticks with a charge of dynamite on the end. He dropped three or four of them down the hole where the periscope sticks out of the pillbox and smoked the Heinies out. He did all this under enemy fire.”

Though the first white flag was sighted within Fort du Roule at 11:30 a.m., the Americans didn’t secure the sprawling complex until nearly 10 p.m. But when they had, they could look down on a panoramic view of the port they had come to liberate, and would help do exactly that by the end of the day on June 27.

The 314th Regiment would spend the next few months fighting its way across France, capturing La Haye-du-Puits on July 7, then breaking out of Normandy in late July before reaching the Seine on August 20.

On October 8, the regiment found itself near the Foret de Parroy in northeastern France. With an attack scheduled for the following day, the commanding officer of the 79th Division, Maj. Gen. Ira T. Wyche, paid a visit to the 2nd Battalion command post. In a brief ceremony, Wyche awarded John D. Kelly the Distinguished Service Cross for his actions at Fort du Roule.

Kelly, who avoided injury in the attack on the fort, had been “slightly” wounded July 5 but was back in action two weeks later and remained with his unit as it slogged ahead. With winter approaching, the 314th was among the units working its way through the treacherous Vosges Mountains on the way to Haguenau, a village barely 10 miles from the Rhine. The regiment crossed through the Saverne Gap on November 22, but the recently promoted Technical Sgt. John D. Kelly would go no farther. He died on November 23.

Kelly’s wife, Mary, got the news back home in Grove City, Pennsylvania. Kelly was the oldest of five children, with two brothers and two sisters. His parents Daniel and Elizabeth lived in Cambridge Springs.

On January 24, 1945, the War Department announced the Distinguished Service Cross awarded to Kelly for his actions at Fort du Roule had been upgraded to the Medal of Honor. On February 9, Kelly’s widow, parents and youngest sister Geraldine traveled to the Logan Armory on the University of Pittsburgh’s campus. There, Col. Lucius McK. Crumrine presented Mary Kelly with the nation’s highest honor for military valor. 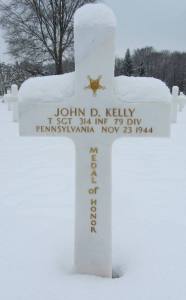 Proud as they were, the Kellys were no different than any other Gold Star family. They would carry John’s death with them for decades to come.

In a 1994 interview, John Kelly’s sister Katherine Schilling told the Pittsburgh Post-Gazette that their mother “never did believe he was dead. To the day she died, she never did believe it, which was hard on her.”

T/Sgt. John D. Kelly remains in France, at the Epinal American Cemetery, not far from where he spent the final weeks of his life.